SCOTCH WHISKY has begun the 2020s with its worst export slump for at least a decade and its weakest overseas sales since 2010 both by volume and value.

The UK's leading food and drinks industry, Scotch whisky had in 2019 racked up record-high export figures for the 2nd year running both in terms of money earned and spirit sent overseas.

But Covid lockdowns have crushed economies, industries and livelihoods the world over. The impact on the world's favourite premium spirit is plain to see. 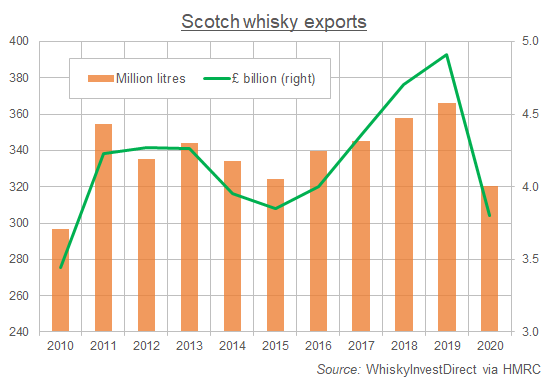 "The ongoing decline in on-trade sales, together with the decimation of global Duty Free, have put many Scotch companies on the back foot. But this said, the Scotch industry thinks and acts for the long term and many brand owners are already talking about a strong bounce back."

There's lots more analysis of the data to come here on Whisky News. But comparing volume with value in the 2020 export data shows where a strong bounceback in Scotch exports might start from.

"With sales in over 180 markets," says Rupert, "the industry has a strong history and habit of managing well through turbulence." And one very practical response to last year's Covid Crisis stands out from the new data – a steep cut to export prices to help stem the drop in volumes.

Running 2020's export quantities against revenues gives us a very rough but telling metric, showing how much importers spent per litre of Scotch on average.

Starting with exports to the USA – the drink's highest value destination – the Scotch industry received an average £23.35 per litre last year, down 22.2% from 2019's figure of £30 and confirming both the impact of Donald Trump's trade tariffs on single malts, hitting the higher-end of the market, plus the anecdotes of America's sudden slowdown also borne out by results from No.1 whisky producer Diageo (LON: DGE).

At the other end of the 'value' scale, the No.1 market by volume France remained the 2nd biggest by value, and it actually bought more Scotch as the average litre fell 14.4% in export price from £8.90 to £7.60, offering whisky's eagerest fans a real bargain. Neighbouring Germany (Scotch whisky's 5th largest export market by value) also spent less, down 12.3% at £11.65 from £13.30 per litre in 2019.

Asia's big two export points however – Singapore and Taiwan – raised their average spend. The 3rd and 4th largest markets by value, they in fact paid 15.4% and 3.6% more respectively for a litre of Scotch in 2020, averaging a spend of £28.20 and £36.40 across all categories of single malts, blended malts, blended and grain whisky and cementing their place as the highest-value consumer nations.

Given such bright spots, plus the low base any re-opening of social life will start from, it's little wonder that amid the apparent gloom in the headline figures, "The mood in the Scotch whisky industry remains positive," says Rupert.

But should the global drop in export prices worry stock-holders in maturing Scotch? No, says Rupert.

"The Scotch whisky industry has held, historically, around 7-8 years' worth of stock. That's the average length of maturation needed for good Scotch whisky at bottling. And right from the start of the Covid-19 pandemic, distillers have been re-doing their forecasts to try to keep their stocks balanced and in line with demand for the decade ahead.

"Forecasting that far ahead is always tricky, never mind having a global pandemic to factor into the equation. But whether or not the industry is in a stock glut or shortage will depend not only on the sales impact from 2020 but also on the industry's production levels over the past five years – which were far from excessive – plus demand for those supplies over the years ahead."

Scotch distillers, in other words, have closely managed their output and forecasts during the Covid pandemic. Everyone knew the 2020 numbers were going to be hit hard. But as the industry's No.2 player Pernod Ricard (EPA: RI) suggests in its latest report to investors today, the outlook now is for a solid if not strong recovery, driven by core markets.

Director of research at No.1 precious-metals trading and ownership platform BullionVault, Adrian Ash moonlights for WhiskyInvestDirect whenever he gets chance, looking at industry data the better to understand trends and the price outlook for the world's (and his) favourite premium tipple.